The following pages will document the construction of my Rand Robinson KR2S aircraft that I plan to power with a Chevrolet CORVAIR motor. This will be a process that will take me several years to complete, therefore don't look for pictures of my airplane flying anytime soon. I will add pages as I work on the plane (time permitting) and try to get them onto the web in a timely manner.

Please don't expect any fancy web pages, I just want to publish the pictures to document my progress. I will try to make the pages small enough for those of you unfortunate enough not to be on a high speed connection, however, I will include links to larger versions of the pictures for those who want to view them.

I may include links at some point in the future to post pictures for others as a courtesy to those on the KRNet (or the CORVAIRNET).

All the pages on this site were written using Windows NOTEPAD.

Wow, it has been almost a year since the last update. At this rate, I'll never finish this airplane. I keep setting deadlines for myself to finish and then something happens to change that deadline. This is a small update to let you know I am still working on it every now and then. Even though this update is near the end of March, I've not worked on the airplane since early January. This is because I have been TDY (that is temporary duty for those of you not familiar with the military and TAD for those of you Navy and Marine types) since the end of January. Since I had a little time as this trip winds to a close, I figured I'd make a small update using the pictures I have on my laptop. I don't expect to get much more done on the airplane for a little while since I am now expecting to have to PCS (permanent change of station) and move again this summer. This will of course force me to move the airplane again.

This update is a small one and creates two new pages: the tail and the wings.

I now have 881 hours invested in the construction of my bird. I've been working on building a mold for the center wing section. I've not pulled any of the pictures off the camera yet, but I thought I'd at least make a small update and add something I promised long ago.

I've mentioned in the past that when I build, I set the camera up to take pictures at one minute intervals. I figured that eventually I would try to put the pictures into a video clip. Well, I've been playing with it and have created a video clip that follows the building of my motor. It starts with the motor sitting in the back of my Suburban and concludes with the current status of the motor as it sits on the mock firewall. For those who may be interested, I have a 6MB version and a 23MB version.

Ok, this update is only 6 months since the last update. I now have 865 hours dedicated to the construction of my airplane since I started six years ago.

This update is on the assemble of my Corvair motor.

Here is a picture showing the current status of my Corvair motor. 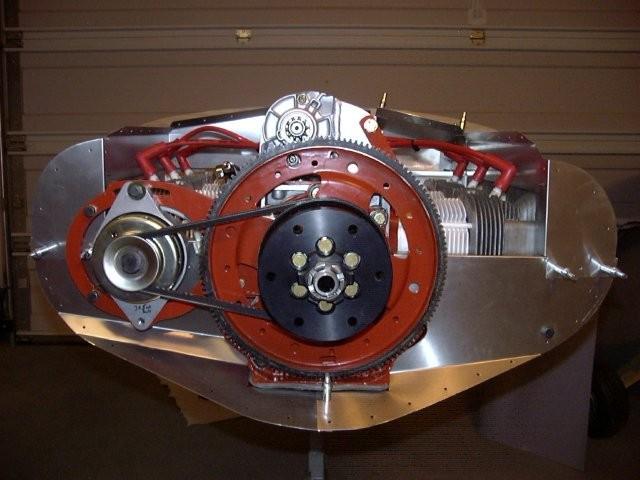 Main KR2 site at krnet.org.
A great site with many KR related links. A must see if you are even thinking of building a KR.

My brothers homepage is at k-farley.com.
Kevin has been a great help in the programming of this site (at some point there may be some cool stuff here that I've learned from him).

Countdown to AirVenture 2009! I do not know if I'll be able to attend this year or not due to a possible move.

Please note that I am a non practicing Electrical Engineer--Not an Aerospace Engineer...These pages document the construction of my airplane only. I will follow the plans for the most part, however, any modifications I make are on my own decision and not to be taken as safe. If you follow any of my techniques or procedures, you do so at your own risk!

Back to my main page